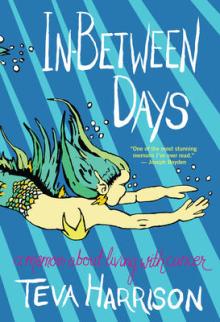 When Teva Harrison was diagnosed with metastatic breast cancer at the age of 37, she did everything she could to turn back the clock: she became vegan, started juicing, smoking pot, burning incense, and drinking potions made of flaxseed oil and  turmeric. When she learned that the cancer was incurable and had to scale back on the alternative treatments, she picked up a pen started drawing as a way to manage the emotional pain that no amount of hydomorphone could soothe.

“One of the most stunning memoirs I’ve ever read.”– Joseph Boyden

It is harrowing stuff, but Harrison makes it palatable with her humour and joie de vivre. In one particularly amusing panel, Teva sketches herself undergoing spinal stereotactic radiation therapy, a very precise process in which she is basically vacuum sealed into a mould and blasted with radiation. She is completely taken by the absurdity, and can’t contain her glee when she asks the technician to take a photo for her to later show her husband, David.

It’s not a stretch to say that without David, Harrison might not still be around to see her book published later this month. In the short and sweet passages that accompany her drawings, she scribes her appreciation for the man she met and married after a brief, whirlwind, transcontinental romance. Most of the second part of In-Between Days is dedicated to him, with alongside Teva’s matrilineal family (many of whom succumbed to cancer at relatively young ages).

The third portion of the graphic novel is its most interesting: it deals with how Teva negotiates being sick in public. Although she is a seemingly healthy person to those who encounter her briefly on the subway or those who are introduced to her at a party, she lives with chronic pain, fear, uncertainty about the afterlife, how to best live however many in-between days she has left. It is compelling stuff, and a true reminder to live each of our days with compassion and kindness for those whose paths we cross, if only for a moment.

In-Between Days is shipping now for publication on April 23rd.

Order from the University of Toronto Press

This site uses Akismet to reduce spam. Learn how your comment data is processed.